About The VIP Test Modeller

The VIP Test Modeller provides Model-Based Test Automation for commercial, homegrown and open source frameworks. Automated tests and data are generated automatically from flowchart models that are quick-to-build and easy-to-maintain, and can be created for UI, API, and databases testing. Mathematical algorithms generate every test case needed to "cover" the model, including the negative scenarios and outliers often missed in testing. The rigorous tests update with the central flowchart models, rapidly and rigorously testing fast-changing systems.

The test cases cover all the logic contained in the model, and come equipped with the test data and automated test scripts needed to execute them. Over 500 dynamic test data functions define synthetic test data for every possible test, including the negative scenarios and outliers often missed in testing. The test data resolves "just in time" during test execution, while data can additionally be found automatically from a range of back-end systems, for complete and always up-to-date test data.

Defining automated tests is just as quick and simple, picking from automated actions using a fill-in-the-blanks approach. Action packs can be parsed and imported from existing frameworks, combining the simplicity of visual test design with the flexibility of coded approaches. The VIP Test Modeller then compiles the automation logic and data into executable scripts as optimised tests are created, rapidly generating a rigorous test pack. 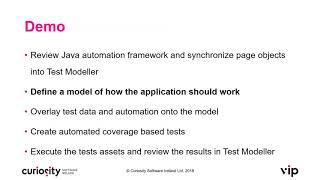 4
#4 Alternative to The VIP Test Modeller
mabl is a test automation platform that helps software development teams create and run end-to-end testing across the...
Learn More

Already have The VIP Test Modeller?

Reporting of acitivty in a PSD2/Open banking Sandbox

We were implementing a PSD2 sandbox to support testing of APIs for a large bank in Europe. This...

We were implementing a PSD2 sandbox to support testing of APIs for a large bank in Europe. This required detailed reporting on activity within the sandbox. Using a simple interface to VIP Test Modeller we were able to simply ship request/response pairs across to the VIP Test Modeller. VIP Test Modeller then collected the information and enabled detailed or summary reports to be created based on the provided detail. An additional bonus we got from the data was that it could be used for problem diagnosis.

It was very simple to integrate our solution to provide a feed of information to the VIP Test Modeller for post processing for reporting purposes.

To date, we have not experienced any issues with the software.

After evaluating a number of different tool vendors, Volo.ai selected Curiosity software as they...

After evaluating a number of different tool vendors, Volo.ai selected Curiosity software as they provide next generation capabilities that leading vendors (i.e. Magic Quadrant) was unable to provide our landscape is testing next generation A.I platforms (e.g. Neo4J, OpenCV, Kafka / Zookeeper, MongoDB, VectorFlow) which other vendors had limited native support for any of these technologies.

The ability to generate A.I. ready test data lakes to help train and prove our algorithms and the ability to provide test data coverage and built in code dependency analysis was a game changer.

TestModeller is an outstanding tool for test automation and test data management. We have run a PoC...

TestModeller is an outstanding tool for test automation and test data management. We have run a PoC for 6 months using an on-premise installation (in Azure), utilizing the Cypress framework. Tests are run in docker containers when generated from TestModeller and updated to Gitlab. Also, the ability to separate models and generated tests from the functional representation of the elements in the system under test, enables us to generate tests even before code is written to implement an element in the DOM for in-sprint testing. This of course also eliminates the extensive maintenance you normally must conduct to test automation frameworks.

Visual modelling generally reveals more test cases by showing which paths through the system under test are being visited.
Testers and other stakeholders can easily do the modelling while engineers overlay the automation.
Complex applications can be broken down to manageable models in a hierarchy
Great connectivity to test frameworks and other applications.

Some of our requirements (Cypress, Docker) gave some challenges, but with very good support from the vendor it all came to work well.

It seems good to watch this video tutorial. Its easy way to under stand the flow like how to create and how to map the values etc..

Total I would rate this VIP to 3/5

Must have all videos with full set like how to add test data.

for instance: I have tried to create an automates script with this modular with the help of the video and one point I have created and mapped the variable and generated the script. but we don't know how to run. late we became to know to use the server but we didn't see the such a explanation from the videos. we would suggest to explain with set of video.

Hi Jerome, thank you for taking the time to review The VIP Test Modeller, and for suggesting new tutorial videos.

We are constantly adding to our online library of on demand resources, and will continue to do so. In the meantime, I think that we have some videos that should be useful to you.

Video instructions on adding test data can be found as part of the following training course: https://curiositysoftware.ie/vip-knowledge-base/vip-test-modeller-101-videos/

Instructional videos for running test scripts and setting up the automation server can also be found in this knowledge base article: https://curiositysoftware.ie/vip-knowledge-base/vip-test-modeller-102/

Thanks again for taking the time to review The VIP Test Modeller!

Test Modeller is a major accelerator in setting up automated test processes for clients and has a...

Test Modeller is a major accelerator in setting up automated test processes for clients and has a positive impact on the quality of the delivered applications.

Our company Omnext is working together with Curiosity to implement automated testing for clients in lowcode environments such as Mendix and Outsystems. Omnext is providing data about the lowcode application, which is imported in Test Modeller via an interface. Testmodeller provides seamless integration with external data sources. The capability to import external data sources and generate out-of-the-box automated test cases, which can be run in different testing tools is a major accelerator for the testing process of the client.

We have not experienced significant issue while working with Test Modeller. Omnext and Curiosity are working on further improvements of the exchange of data and other lowcode environments.

Showing 5 reviews of 23 Read all reviews

Q. What type of pricing plans does The VIP Test Modeller offer?

Q. What are the main features of The VIP Test Modeller?

Q. Who are the typical users of The VIP Test Modeller?

The VIP Test Modeller has the following typical customers:

Q. What languages does The VIP Test Modeller support?

Q. What other apps does The VIP Test Modeller integrate with?

The VIP Test Modeller integrates with the following applications:

Q. What level of support does The VIP Test Modeller offer?