4,8 (117)
Write a Review!
The simplest CI/CD tool ever made
See alternatives

Buddy is a cloud-based CI/CD and DevOps automation platform for web developers, which provides tools for building, testing, and deploying applications. The platform includes 100+ built-in actions to help simplify development and deployment pipelines. Buddy offers a range of actions covering builds, tests, deployments, website monitoring, and application management, in order to aid with tech integration and monitoring. With support for languages and frameworks including Phython, Ruby, React, Elixir, Gatsby, Angular, and many more, Buddy can be used by developers from any background.

With Buddy, DevOps teams can build websites or applications, run SSH commands, and deploy applications to any server or cloud. It works with a range of Git providers including GitHub, Bitbucket, GitLab, and other private repositories, and facilitates deployment to IaaS or PaaS systems including Amazon Web Services, Google Cloud, DigitalOcean, Rackspace, Heroku, Azure App Service, Shopify, UpCloud, Vultr,and Netlify.

Buddy allows users to fetch dependencies, compile code, compress CSS, and run Gulp/Grunt tasks on every push to branch, on click, or recurrently. It facilitates the building and pushing of Docker images, as well as the creation of delivery pipelines. 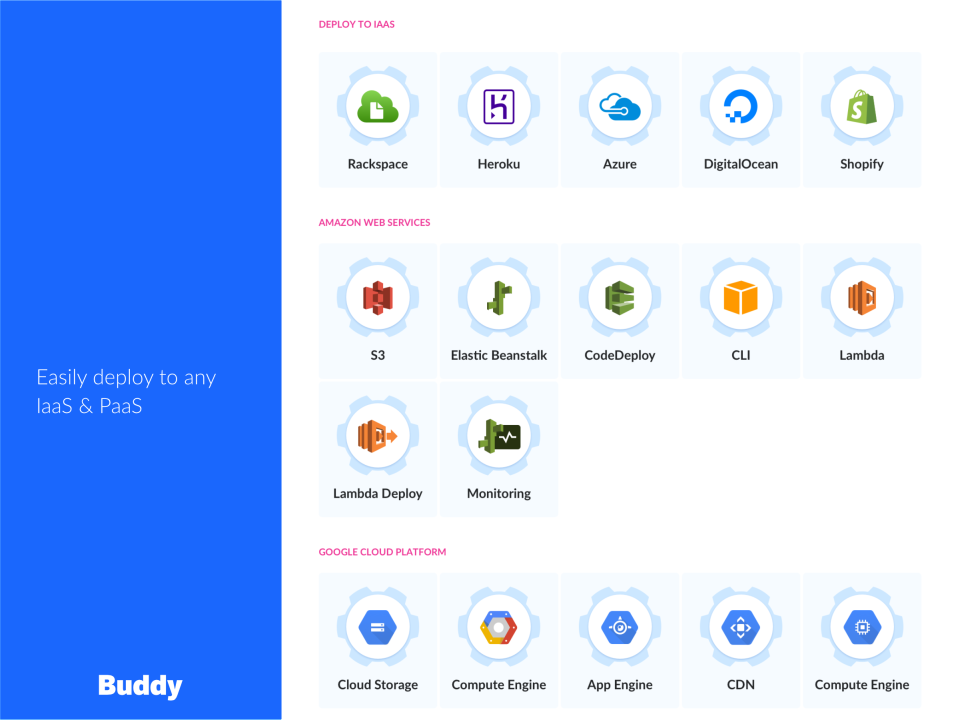 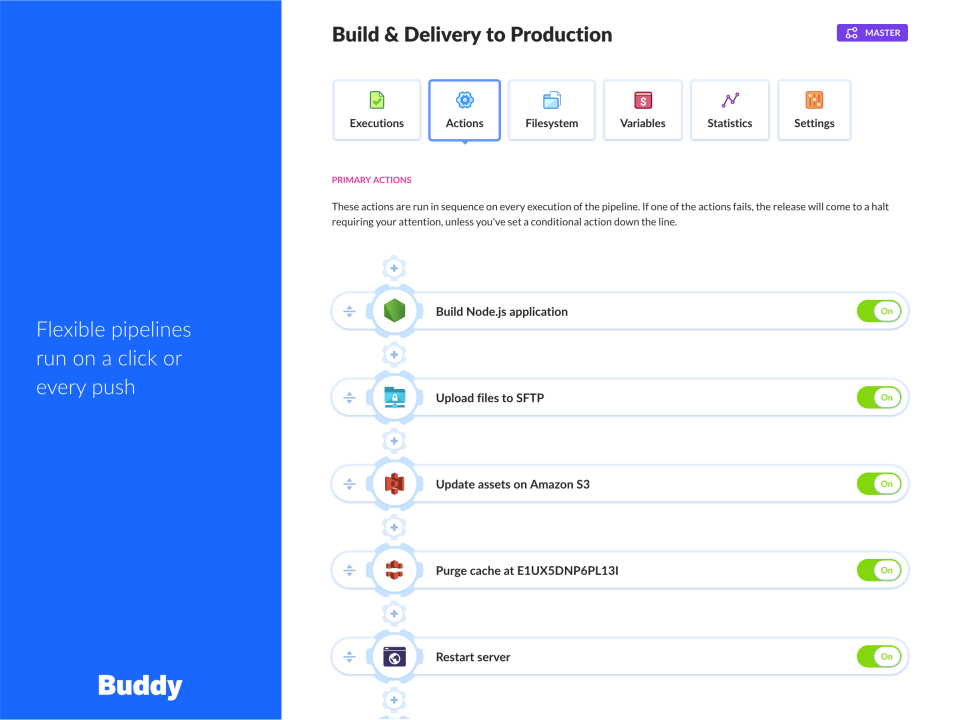 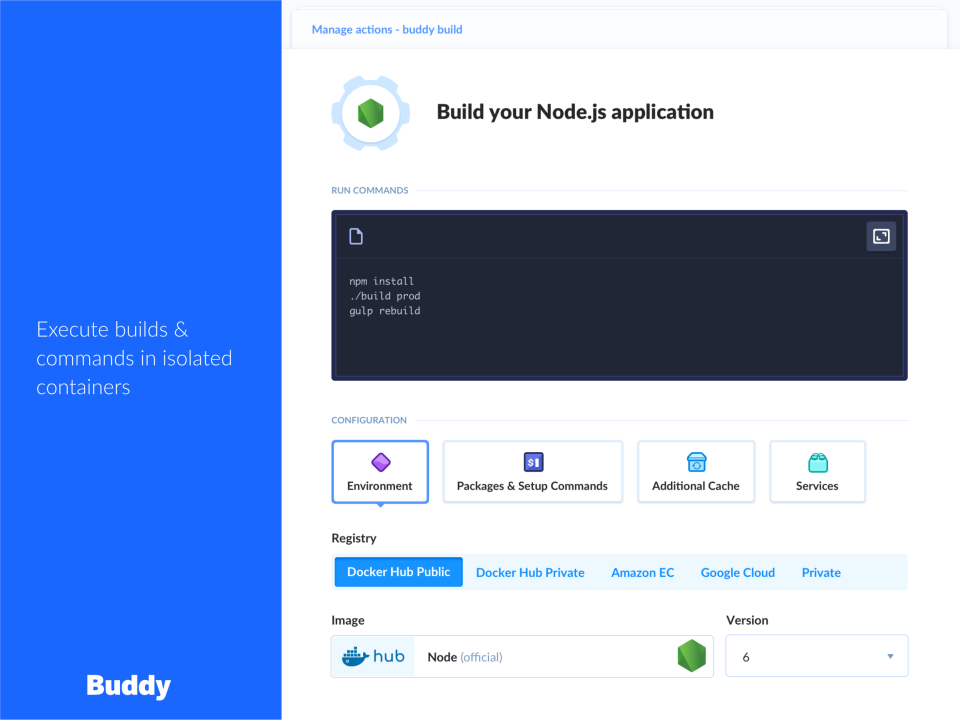 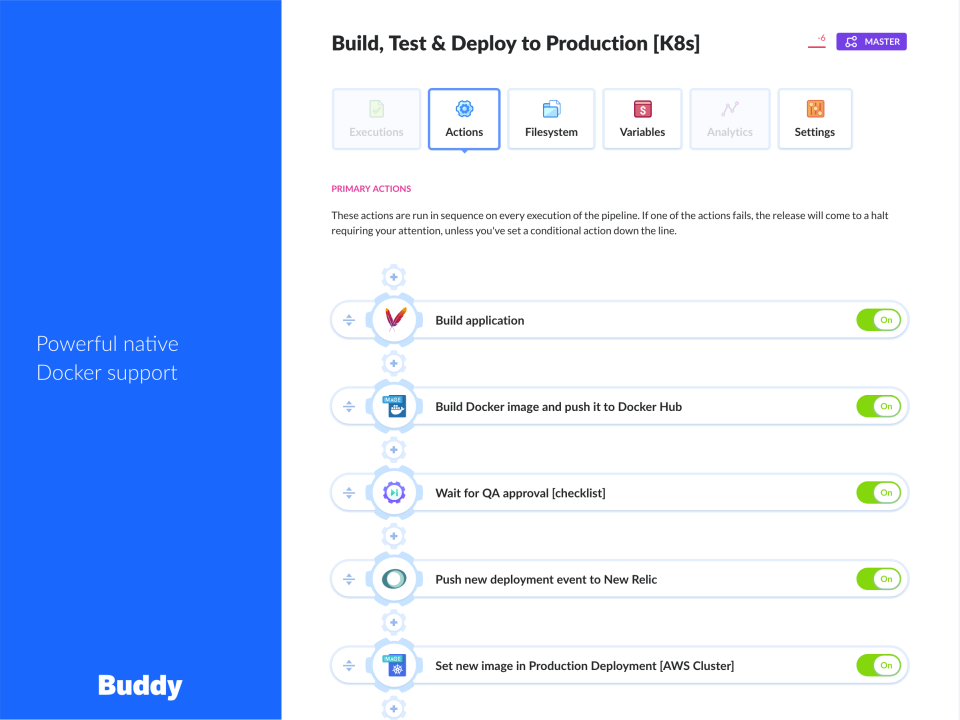 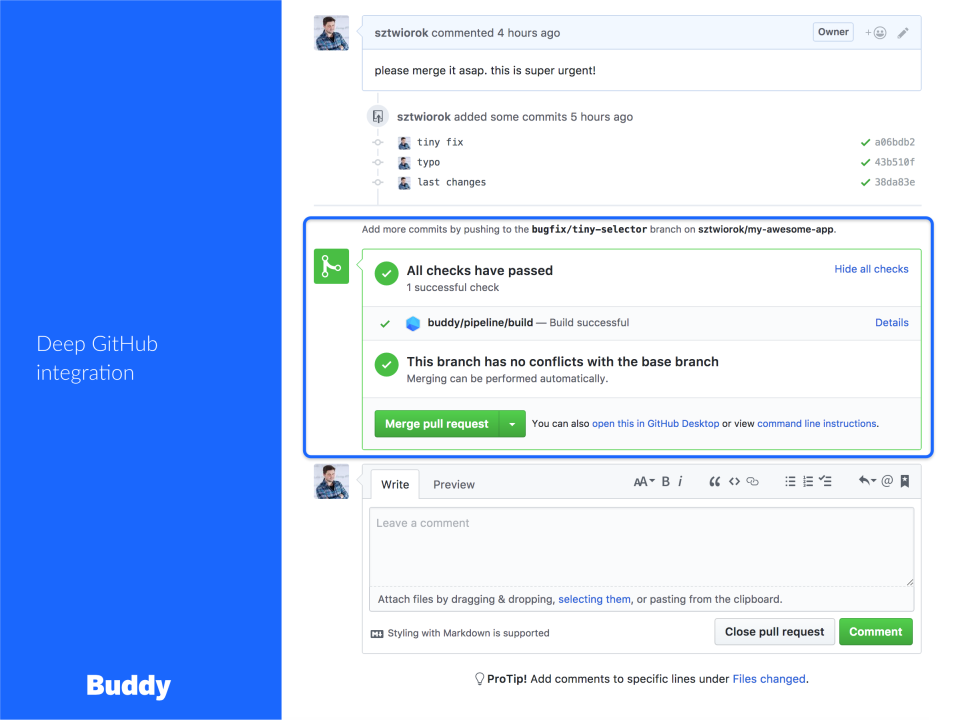 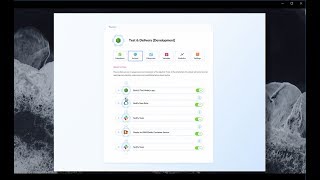 4,6
#3 Alternative to Buddy
OutSystems is a modern application platform, with AI-powered automation across the entire application lifecycle to help...
Learn More

The unique and intuitive way we can interact with it. It is a complete platform that's also very simple to use, so simple that setting up any new pipeline usually takes ten minutes tops.

At our company, we use multiple Buddy actions, such as: File transferring (SFTP), performing Status Checks for CR, building and pushing Docker images, establishing containerized environment for tests and setting up K8s deployment images. And we are pretty happy with our overall experience with Buddy.

Price, maybe? IIRC, it's a little more expensive than alternatives but I think it's worth it in the end.

A must-have automation tool for the non-IT professional

Overall my experience has been absolutely amazing. I have been able to deploy multiple technology...

Overall my experience has been absolutely amazing. I have been able to deploy multiple technology stacks to multiple different environments, integrate PHP unit testing, check my applications' up-time, all while viewing everything in a single interface. Buddy has numerous 1st-party integrations to various platforms and tools to get you started very quickly. But what I have found invaluable is the tools that are made available for developers to create/customize their own integrations via cURL or SSH.

Buddy makes automation easy for developers who are not IT administrators. Unlike that of some of the other automation platforms, the available presets and hints that each pipeline comes with allows you to develop and customize your deployments and testing with very little learning curve. I would say that I love the user-interface and user-experience the most. The visual representations and animations make the tool feel more complete and polished than some of the competitors.

Unfortunately I would say that I like least is the cost. As both a full-time developer and a freelance developer, Buddy can provide services to developers of all disciplines. However as a freelance developer who sometimes has to work on a pretty strict budget, some of the entry-level pricing tiers can be a bit steep on a monthly basis.

Overall its a great tool to integrate CI and since everything is connected very well, it can do...

Overall its a great tool to integrate CI and since everything is connected very well, it can do magic during the complex deployment process.

Its very easy to set it up and get it going. My favourite is the UI.

There is no proper documentation or training videos on this tool. Though its easy to setup some part of it, sometimes its really hard to find the help and configure something custom.

People usually complain about paying for something they can make themselves. Buddy has freed up a...

People usually complain about paying for something they can make themselves. Buddy has freed up a lot of time for everyone in the organization by removing the technical skill and knowledge of Buddy configuration. The time saved is WORTH every penny!

The UX is so simple yet so powerful that anyone can create pipelines. Even our non-technical users understands the software and create pipelines to automate their needs from the code.

The cap of concurrent runs is set to 4 on self-hosted. Even though the wait time is pretty low, it's still annoying when we deploy large amount of microservices.

Buddy couldn't have come sooner for us. It has solved all of our problems and now allows us to...

Buddy couldn't have come sooner for us. It has solved all of our problems and now allows us to deploy in a variety of complexities in no time at all.

- Very regular software updates, adding great new features all of the time
- Decent UI that allows us to do everything we need. YAML configuration available to those who don't want it
- Sensibly priced, self hosted option for those who want to keep it in-house
- Good integration with all of the tools we use and more

- We have to manually renew our LetsEncrypt SSL through the CLI tool on the server
- Hardware requirements can be a little high if using Docker, but that's more of a Docker problem than Buddy

Showing 5 reviews of 117 Read all reviews

Q. What type of pricing plans does Buddy offer?

Q. What are the main features of Buddy?

We do not have any information about Buddy features

Q. Who are the typical users of Buddy?

Buddy has the following typical customers:

Q. What languages does Buddy support?

We do not have any information about what languages Buddy supports

Q. What other apps does Buddy integrate with?

Buddy integrates with the following applications:

Q. What level of support does Buddy offer?