4,6 (161)
Write a Review!
Duda is the web design platform for scaling your agency.
Visit Website Compare

Duda is a leading web design platform for web professionals and agencies of all sizes, with powerful team collaboration and client management tools for building and managing websites at scale. Our platform enables you to build feature-rich websites that are perfectly suited to desktop, tablet and mobile, and automatically optimized for Google PageSpeed.

Duda has partnered with some of the biggest players in the industry, including Hibu, Italiaonline, 1&1, UOL, Sensis, and Publicar. The company has won multiple awards over the years and was ranked 224 in Deloitte’s Fast 500 list for 2016. In 2017, Duda was named PCMag’s Editors’ Choice website builder.

Duda was founded by Itai Sadan and Amir Glatt in 2009. Based in Palo Alto, California, it currently hosts more than 12 million websites.

Duda is the leading web design platform, that was built with web design and digital agencies and SMB SaaS in mind.

Duda is the website builder you can call your own! 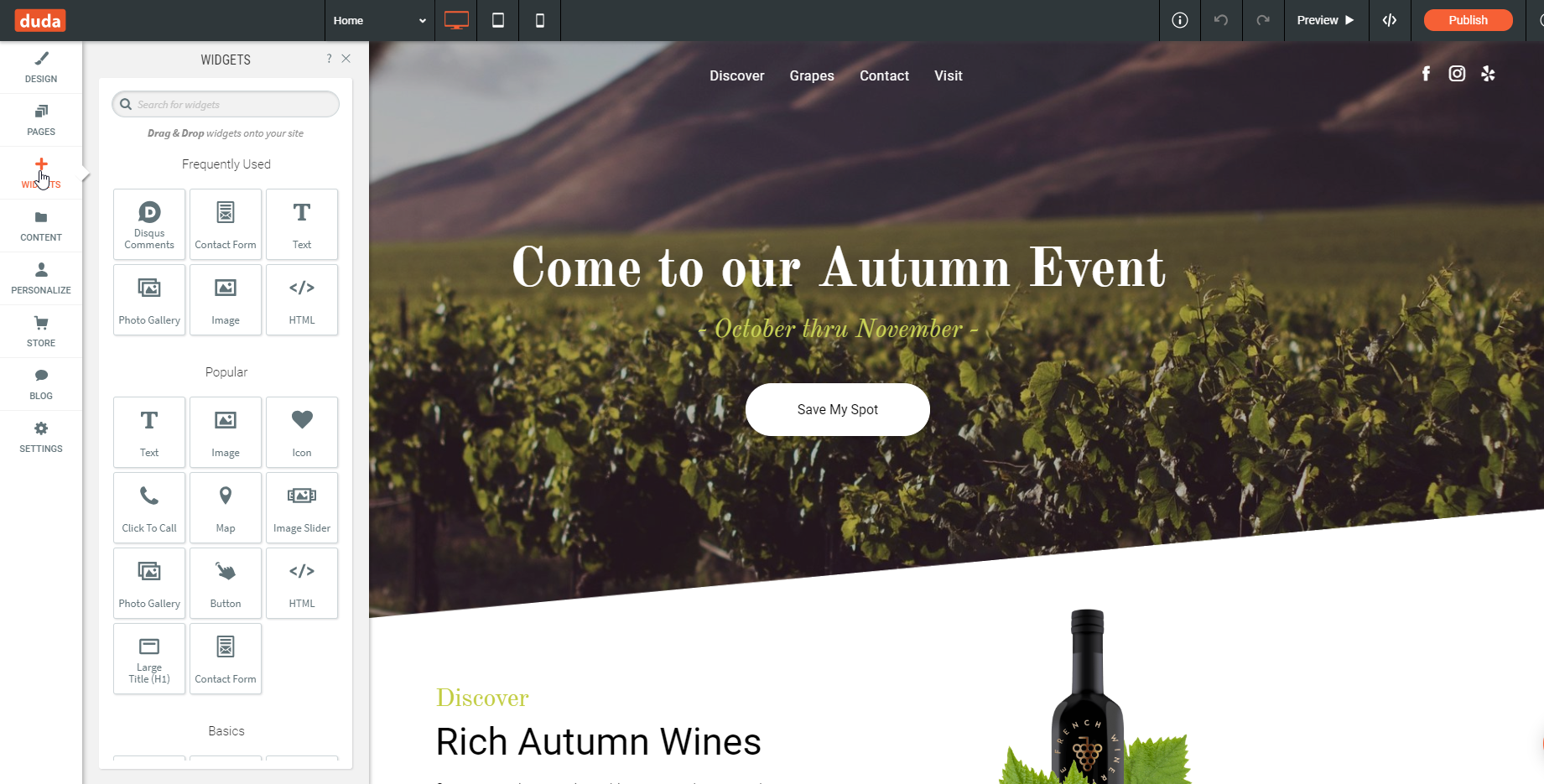 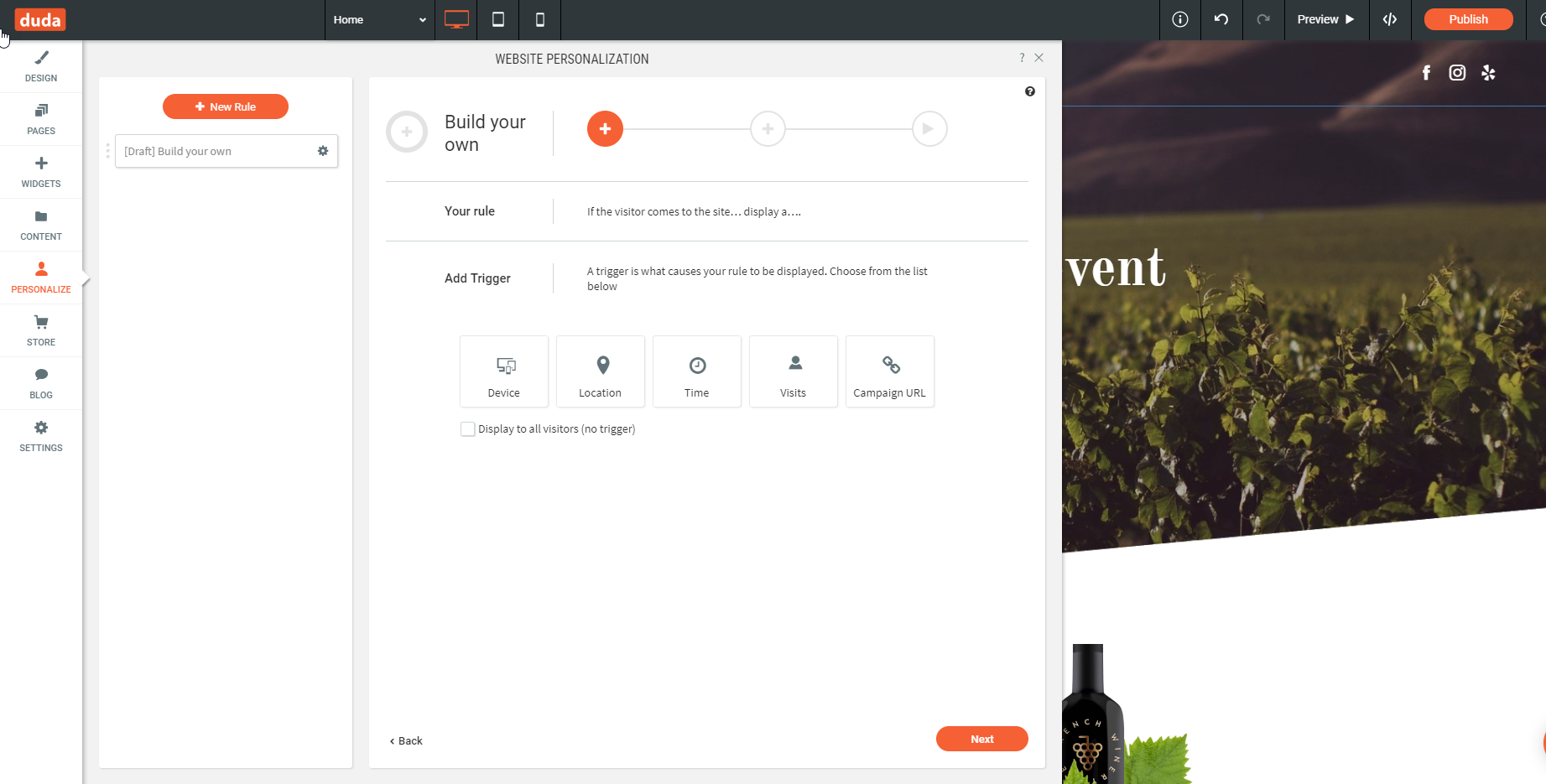 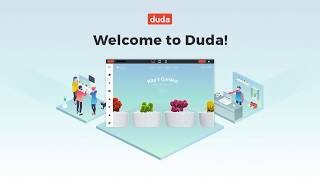 4,7
#2 Alternative to Duda
Marketing 360 is trusted by over 20,000 small businesses. Business owners use our business growth platform because the...
Learn More

4,6
#4 Alternative to Duda
WordPress is a website and blog creation and publishing platform with tools for aesthetic designing, visitor tracking,...
Learn More

I have enjoyed every part of it and geek out talking about it to clients or friends.

I have enjoyed every part of it and geek out talking about it to clients or friends.

I love everything about it, it can be a very simple platform that you can give it to your customers for drag and drop and as complicated as completely hard code the website for it to do whatever you want.
Saves on time, loads faster, love the load balancing aspect of it. Takes out so many things that I used to worry about building it in a Wordpress, PHP environment.

I have not run into it yet. Even though there might be some, the team has been very efficient to handle them .

We're a small branding and marketing company and we don't usually have super large budgets to...

We're a small branding and marketing company and we don't usually have super large budgets to design, develop and deliver websites. Duda helps us do that with very little complexity. It's a streamlined platform that delivers the punch and impact of more complex environments but without all of the junk that no one really needs or wants. The ease of implementation makes it possible for us to be more efficient and cost-effective on website builds.

Duda is an incredibly easy platform to work with and produce really solid websites and engaging experiences. I've worked on Wordpress (always hated it), Joomla, Drupal, Kentico, DotNet Nuke, and other platforms, but Duda is the ONLY platform I have found that makes it incredibly easy to go from design to live site with so little friction. The WYSIWYG ease of implementation has increased our profitability and productivity. It's an awesome platform and I highly recommend you check it out. You will be glad you did.

The toughest thing about using Duda is that clients and prospective clients these days ask what platform you're going to build in and since so many have heard of Wordpress it take a lot to get them to feel comfortable with the switch to Duda. Once I walk them through the back end to demonstrate the CMS they usually have an "Aha!" moment and get on board.

DUDA - can I get a minute of you time?

Overall we are very happy with the product. It is very fast to implement a website.

Overall we are very happy with the product. It is very fast to implement a website.

We found DUDA very intuitive and their support videos are informative. The layout and menu are quick and it is easy to access the tools you need. All the built-in widgets are easy to drag into the page. It's simple to use, quick to implement, SSL and DNS settings are straightforward.

Accounting and the relation plan upgrading and downgrading are cumbersome and involve more time and require a human interface as opposed to clinking some buttons and a lot more time is involved than should be. Very frustrating when moving from Basic Plan to an agency plan. They say they are aware of problems and are working to make it better. I believe them because it is that bad. Ah, growing pains. We feel some of the support answers are a bit smug. And we do not ask questions that are in the FAQs or support docs.

Used the platform for over 4 years, and still being disappointed with every update.

Awful. But I'm honestly just not sure of viable alternatives. After using the platform for the past...

Awful. But I'm honestly just not sure of viable alternatives. After using the platform for the past 4 years as an end user for my own, and for my partner's businesses, I'd really like to expand and provide a full web and digital agency offering. In terms of websites, this is totally duda's thing.

Custom and white-labelled branding for the editor and site stat reports is a very nice touch and makes Duda a very appealing option for fully fledged agencies. Managing user roles is a breeze too. But the thing is, little bells and whistles are fine - but only if the platform is built on a solid foundation. At the moment, it's not. It hasn't been for the past 4 years.

Support isn't great either. I currently have an open support ticket for a basic issue, which is still open after 5 days. It's now weekend so I don't expect a reply until next week. The issue should be a simple one to rectify and I have suggested a fix but it is up to their dev team to implement. Luckily this isn't a client's website, but imagine if it was? How rediculous this would look to the client. Over a week to fix a simple issue?

Would you really want to build an agency with this level of support? Perhaps they reserve and prioritise their support team to the bigger agencies - I don't know. So if you're a freelancer or small agency maybe stick with the good old reliable CMS that most of the web is built on (you know the one) or fully research your alternatives before you dive into the Duda nightmare.

[Quick note before I start - I've used the platform since February 2015].

There are absolutely some pros to using duda. This isn't going to be a totally negative review. But this needs to be a massive eye opener for the team so they can understand in what areas they are failing their customers.

First up, as a simple WYSIWYG editor, Duda isn't doing a bad job. Trouble is, in today's market this is more of a minimum expectation, rather than a unique or coveted feature. Back in 2015 when I first subscribed, Duda was aimed more at the end user - fast forward to the present and they have marketed themselves more towards agencies and freelancers. In terms of websites built per annum, they're certainly doing a
lot better than in 2015.

They do listen to the community, they do ask for feedback and act on it, and they do work on useful updates. They just do it all... really slowly. Duda isn't an open source platform and unlike other platforms they don't have a strong community of developers behind them. They do however have 'duda pro' developers, but their catalogue of work (like custom widgets) is small, uncomprehensive, and unreasonably expensive. Sure, you can absolutely code widgets and write custom code for your website, but we'll cover what a horror show that is in the 'cons' section.

Look, I begrudge writing negative feedback, especially when I see the hard work being done by the Duda team, but there's just no point beating around the bush, Duda is just a troubled platform.

As mentioned above, I've used Duda for over 4 years, since February 2015, so make no mistake - I know this platform inside and out.

First of all... eCommerce. This is by far and away probably the worst part of the platform. Duda has a longstanding integration with eCommerce platform Ecwid. On the whole, the Ecwid platform is very good - the issue is, is that the integration you get with Duda, is not fully featured Ecwid. It has a limited feature set, and is, quite honestly, terrible. In addition, many eCommerce platforms require 'apps' or 'add-ons' to expand their functionality, whereas, duda's catalogue of apps for their eCommerce integration is pathetically small. Unless your needs (or your client's needs) are very simple, just don't bother with it.

Next up, custom code. When I first signed up to Duda, it was marketed to me in such a fashion where you expected adding custom code to be a breeze. And, of course, I'm not naive - I totally get that when adding custom code to a WYSIWYG editor there is going to be multiple cases of conflicting lines of code. But the functionality of Duda is quite basic, and sometimes you do need to augment that functionality with custom code, which is, well... an absolute nightmare. Don't expect support to help either - they'll just suggest you pay a 'duda pro' to fix it for you. Get to grips with not writing clean code - official support advice for CSS was to just bang !important on everything and bang it in the site wide stylesheet.

Duda can be used by everyone but it has great scope for freelancers and web designers to create...

Duda can be used by everyone but it has great scope for freelancers and web designers to create easy tools and logos in real quick.

Amazing range of applications and widgets for you to add and even create your own customized applications. Too easy to generate tools to work with and make the website looks mesmerizing.

I have no issues with Duda as I love working with Duda but the only thing that makes me sad is pricing which is too high and no free plans for beginners to get entertain.

Showing 5 reviews of 161 Read all reviews

Q. What type of pricing plans does Duda offer?

Q. What are the main features of Duda?

We do not have any information about Duda features

Q. Who are the typical users of Duda?

Duda has the following typical customers:

Q. What languages does Duda support?

Q. What other apps does Duda integrate with?

Duda integrates with the following applications:

Q. What level of support does Duda offer?