SpitFire is a web-based predictive dialer solution for call centers, offering tools to make inbound and outbound call campaigns. It supports a hybrid dialer which uses the web interface for making calls while the software is installed on client’s server. The solution is based on .Net application environment and uses SQL database in the background.

SpitFire Enterprise Predictive (SEP) offers support for unlimited lines and agents. It includes five different dialing modes viz. fixed-rate dialing, predictive dialing, quick connect, preview dialing and manual dialing. The client can load the list with contact numbers into SEP and allow the solution to make outbound calls and connect agents to the answered calls only. The solution keeps a track of time per call and intelligently monitor the call volume & frequency.

SpitFire allows clients to manually set the call rate frequency and accordingly speed up or slow down the call rate, based on the number of agents available for the day or the number of working hours available. The tool displays the complete information stored for the contact on a web interface with flexibility to run multiple campaigns through a single screen. It also supports manual dialing wherein an agent can enter a telephone number and connect with a particular contact at any time.

SpitFire also supports text-to-speech add-on which allows automating message by converting database information into a friendly voice that can be used on both voicemails as well as live answers. The solution offers call transferring capability through which agents can transfer the call to other agents or to a supervisor.

SpitFire allows clients to choose the carrier service of their own and include additional features such as zip tone, call recording, call scheduling, CRM integration and more. It is suitable for small and midsized call centers and caters customers across the United States. Some of its customers are AC USA, Landmark, Call Centre Magic, RadNet and Heller Group.

• The Quick Connect feature allows agents to log into a campaign with a one-to-one dial ratio and reduce drop call rate.

• The preview dialing option allows agents to view the contact information prior to the call and decide to dial-up or drop call. 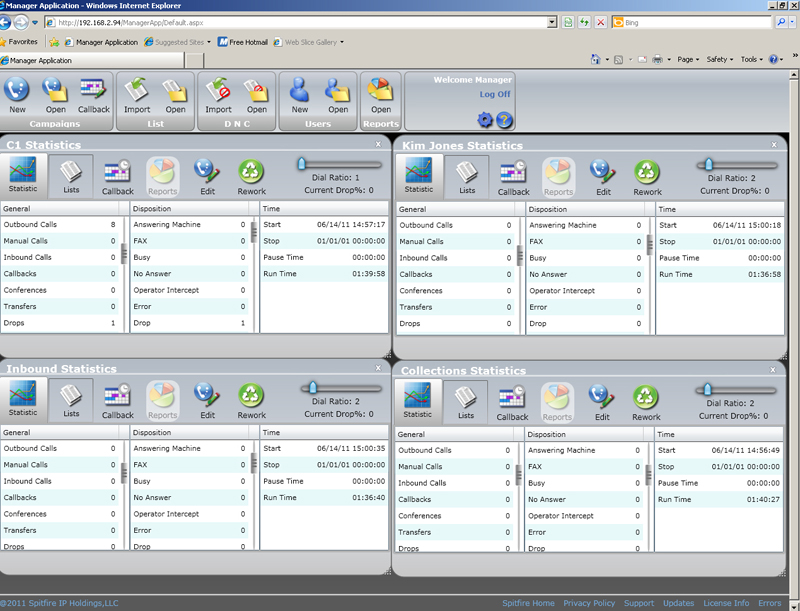 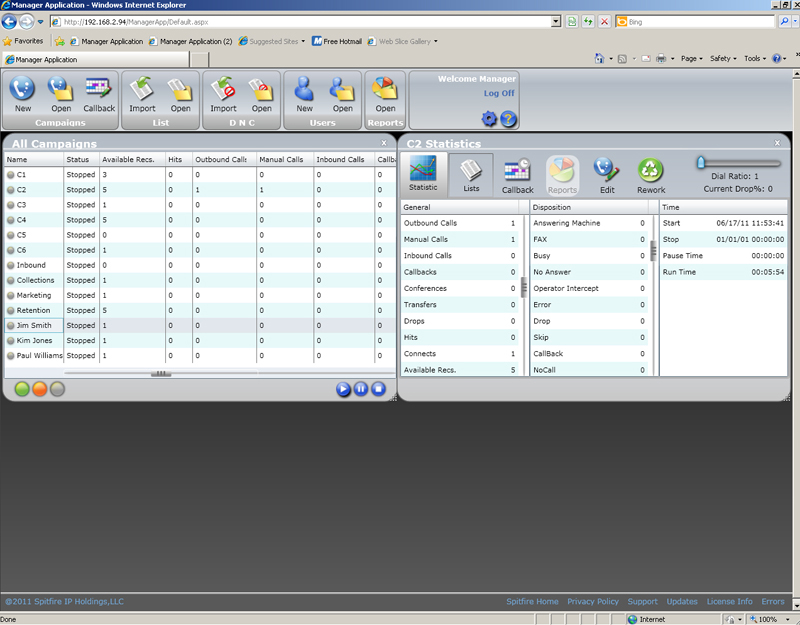 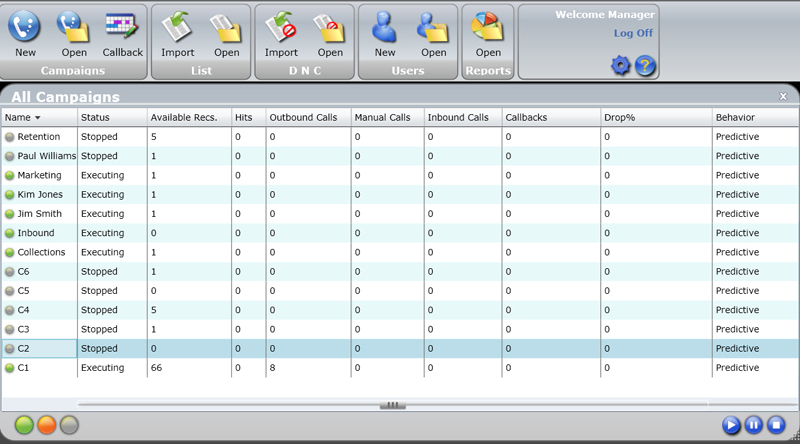 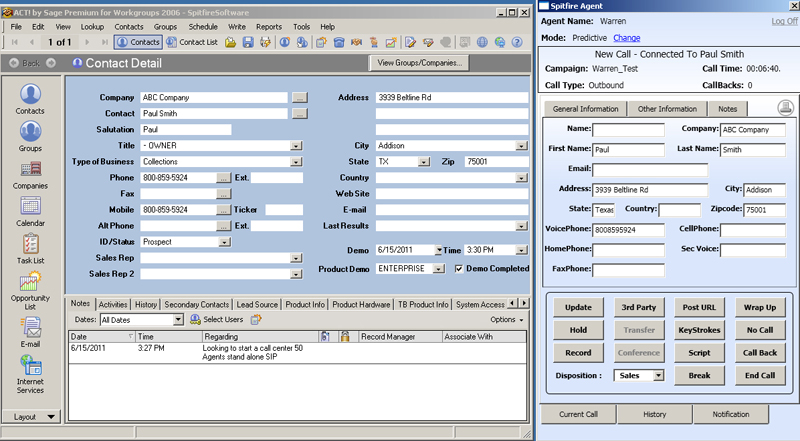 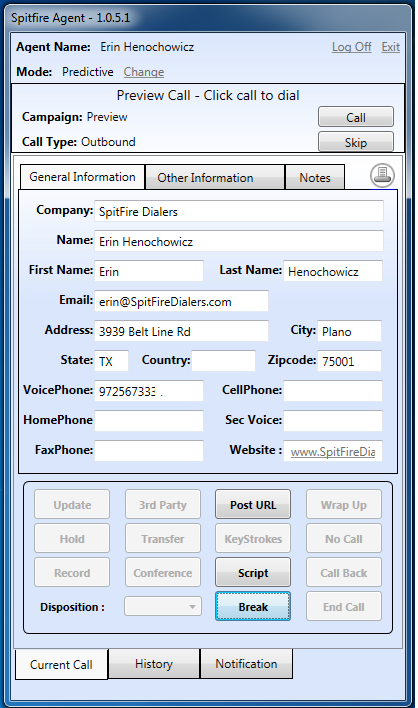 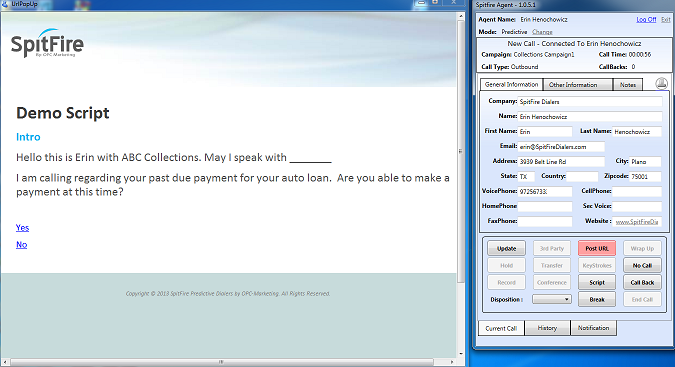 4,1
#1 Alternative to SpitFire
Genesys Cloud is a cloud contact centre and employee collaboration solution that's easy to use, quick to deploy, and...
Learn More Visit Website

4,7
#2 Alternative to SpitFire
VICIdial is an open source call center solution with outbound predictive dialing and features for handling inbound or...
Learn More

4,8
#4 Alternative to SpitFire
ChaseData offers a cloud-based call center solution with both inbound and outbound calling facility and an interactive...
Learn More

Time zones are extremely convenient and the reports allow us to track & improve metrics. It's been priceless in that regard. We also almost never experience any major issues with connections or quality.

It does require a strong network for all the features to work seamlessly but once everything is in order, SPX maintains a strong connection & never drops a call. It's turned out to be a very pleasant experience since integration.

Thank you very much for taking the time to write a review!

Having now worked as a Director of Marketing in the call center industry for over 20+ years I can...

Having now worked as a Director of Marketing in the call center industry for over 20+ years I can say with complete honesty that I have seen it all!
I have worked with many, many dialers in my tenure and worked with many, many organizations that support them. And while I will refrain from speaking negatively about those in the past that seemed to turn in to a complete nightmare, (despite the due diligence I put forth before purchasing them) or the ones that absolutely, almost overnight mismanaged and almost destroyed my entire previous customer database. I will Instead focus my thoughts and words here to convey the complete truth with respect to the current one we operate with from OPC Marketing.

Our call center has been for several years now been operating from the dialing solutions put together and supported by OPC Marketing and to say that the experience has been pleasurable would be a vast understatement! Aside from the fact that the functioning of the machine itself comes with complete ease and efficiency, for us, the added bonus has been the people at OPC themselves. From Warren. Abby and Brent, to Steve Brownrigg in the sales office and even the ownership themselves, we as a company could not possibly be happier and it is my utmost pleasure to say to anyone who may be in the market for a dialing solution, OPC in my view is literally the only way to go.

The support we have had through them and still have today, from the customizations we have requested, to the IT support when needed (which is incredibly rare I might add) to the silly questions we may even ask of them from time to time All I can say is that we could not possibly be happier! They are proactive, innovative, and very much involved from the top to the bottom.

Should anyone ever be assessing different dialer engines, platforms and or companies to move forward with, simply put.. Stop! Because you have already found what I believe and know is by far the best available on the market today, period!

Easy to setup and configure. Scalable to increase as our business grows.

No issues with the product or setup. The user interface is easy to use and understand.

We have a dialer that works most of the time and a 2nd dialer (older software) that was sold to us...

We have a dialer that works most of the time and a 2nd dialer (older software) that was sold to us that is no longer being upgraded and that one barely works.

Fast setup and works. Has reporting features and can set time zones as well as you can now integrate with salesforce.

They suggest you reboot the system at least 1 time a week. Another issue we have is when Windows updates are installed an server is restarted all the services that run the dialers don't always start even if they are setup to restart if they fail to start.

I have been a Spitfire reseller since early 2006 and have purchased multiple Spitfire systems since...

I have been a Spitfire reseller since early 2006 and have purchased multiple Spitfire systems since then - see www.callcentremagic.com/clients.html for a representative listing of some of these sites, their missions, size and connectivity method used.

Initially I was selling Spitfire Pro but ever since the launch of the more robust and fully featured Enterprise Edition my clients have been demanding the newer release, which is written using .Net and Silverlight. I now have sites ranging from just 4 seats up to 50 seats using Enterprise, with a pending order for an initial test 25-seater going into a 5,000 strong call centre, split between Australia and the Philippines - I've been told the executives who were handed the proposal laughed when they compared our pricing to the much higher, forever ongoing hosted rentals they have to pay each month at the moment :-)

Another site of interest has the Spitfire Enterprise server in North Sydney, Australia and 20 telemarketers based in LA, California; when the LA-based agents log on, the dialler immediately calls their extension back, holds that channel open then starts placing calls into Australia. Because the channels are already open, this results in very fast transfers as the dialler simply has to conference the channels together once it has detected a 'human'.

Using OPC's superb Support and technical teams, we have integrated with multiple CRMs (MS-CRM, SalesForce, ACT! etc) as well as a variety of PBX platforms such as Avaya, TrixBox and Panasonic systems. In fact, I've yet to find a CRM or PBX we can't talk to...

So, in summary I'd have to say that I wouldn't like my livelihood to depend on any other system, the Spitfire has proved itself again and again with different clients, sites, missions and technology - I couldn't endorse it enough for mission-critical calling.

Showing 5 reviews of 21 Read all reviews

Q. What type of pricing plans does SpitFire offer?

Q. What are the main features of SpitFire?

We do not have any information about SpitFire features

Q. Who are the typical users of SpitFire?

SpitFire has the following typical customers:

Q. What languages does SpitFire support?

Q. What other apps does SpitFire integrate with?

SpitFire integrates with the following applications:

Q. What level of support does SpitFire offer?